Home-About Jon Taffer
Most people know Jon Taffer as a larger-than-life television personality who takes a no-holds-barred approach to helping hotels, restaurants, bars and businesses reach their full potential. He is also a New York Times best-selling author, a highly sought-after hospitality and general business consultant, and is the creator, executive producer and star of Paramount Network’s hit show,Bar Rescue. For nearly four decades, Taffer has been at the forefront of the business management industry offering his expertise to hundreds of thousands of properties and Fortune 500 companies. By no surprise, studies show that Taffer is the most influential, trustworthy, and intelligent food & beverage personality on television.
Bar Rescue is now in its eighth season on the Paramount Network. Taffer has led the show to account for nearly 25% of the network’s programing and over 900 million viewers. Bar Rescue spotlights Jon as he saves failing bars from looming closure, leveraging his four decades of industry experience and trademarked “Reaction Management” strategy. In 2021, the show topped the milestone of 200 episodes.
This year, Jon goes head-to-head against chef Robert Irvine in an all-new, three-episode series streaming on discovery+ called Restaurant Rivals: Irvine vs. Taffer. In each hour-long episode of Restaurant Rivals, Jon and Robert put their guiding principles to the test, each using their distinct combination of tough love and sharp business acumen to help a pair of struggling restaurant owners back to profitability.
His latest creation is Taffer’s Tavern, an innovative, casual dining restaurant franchise concept that provides a solution for many of the woes that plague the restaurant industry. The Tavern is based on a high-volume, small footprint kitchen format that uses the latest technologies to produce elevated tavern foods and outstanding beverage offerings without the need for a traditional commercial kitchen. The franchise’s first location opened October 2020 in Atlanta, GA, with additional multi-unit locations secured in the Atlanta, Boston, Washington, D.C., Las Vegas and Florida areas.
As an author, Jon wrote Don’t Bullsh*t Yourself, a no-nonsense guide that helps people understand and overcome the excuses holding them back from success. It became a New York Times, Los Angeles Times and Wall Street Journal best-seller in its first week of release, joining his first book, Raise the Bar, on the best-sellers list. Jon’s new book on sale now, The Power of Conflict, provides readers with a toolkit to speak their mind to get the results they want. In 2018 Jon also launched his podcast, The Jon Taffer Podcast, where he sits down with friends and well-known celebrities to discuss current events.
Concurrently, Jon runs Taffer Dynamics, his business operations firm which offers dynamic models for a range of well-known establishments and brands, including the NFL, Anheuser-Busch, Ritz-Carlton, Hyatt, Marriott, Holiday Inn, Sheraton, Intercontinental, Fridays, Buffalo Wild Wings, Famous Dave’s Barbecue, and Wolfgang Puck Express.
When he’s not dedicating his time to bringing back businesses from the brink, Taffer volunteers his time with the Keep Memory Alive Board of Directors supporting the mission of the Cleveland Clinic Lou Ruvo Center for Brain Health. He also regularly offers up his seasoned hospitality skills to the William F. Harrah College of Hotel Administration at the University of Nevada, Las Vegas, where he helps faculty develop curriculum that is in line with industry expectations and trends.
Married for over 20 years to his wife Nicole, who he fell in love with at first sight at Super Bowl XXX, Jon spends what little spare time he has traveling with her, spending time with his daughter and grandson, and occasionally sipping on his favorite cocktail: The Godfather.

Some of Jon’s past awards and accolades include:

When he’s not dedicating his time to bringing back businesses from the brink, Taffer volunteers his time with St. Jude’s Ranch for Children and Ronald McDonald House, and most recently joined the Keep Memory Alive Board of Directors supporting the mission of the Cleveland Clinic Lou Ruvo Center for Brain Health. He also regularly offers up his seasoned hospitality skills to the William F. Harrah College of Hotel Administration at the University of Nevada, Las Vegas, where he helps faculty develop curriculum that is in line with industry expectations and trends. Every year at the holidays, he and his wife, Nicole, host the annual Taffer’s Gift of Giving, with proceeds benefitting the children of St. Jude’s Ranch in Boulder City, Nevada—a 40-acre home for abused and abandoned children located just outside of the Las Vegas Valley. 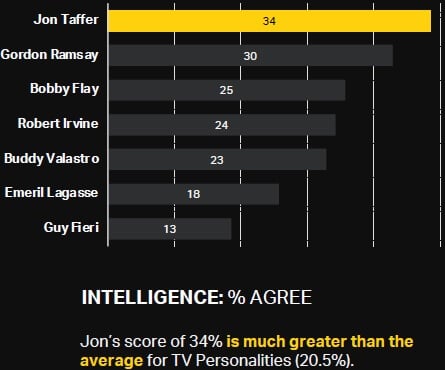 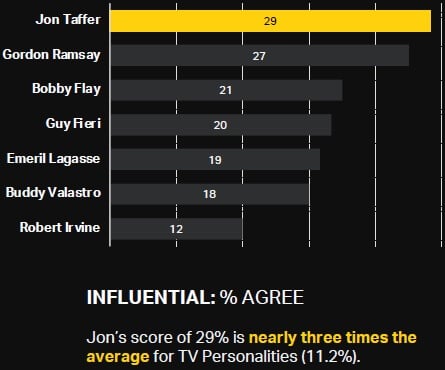 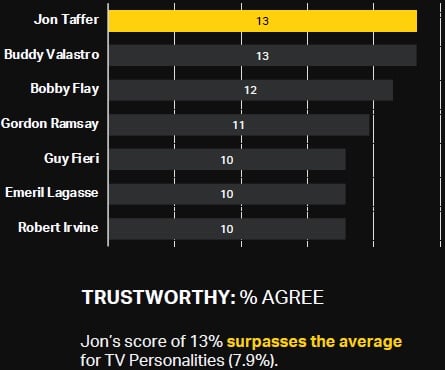