Air Date: August 9, 2015
Season 4, Episode 30 – Put a Cork in It!
Location: Sunset Beach, California
Description: Pressure continues to build in Sunset Beach, when Jon Taffer and his experts challenge Rick Reich, owner of Brix, to focus less on being the center of attention and more on managing his finances and staff.

Jon Taffer and his team of experts head to Sunny California to rescue Brix, a wine bar located in Sunset Beach. Rick Reich, a former trucking business owner, opened Brix in 2005 when he moved him family from Washington to California. In its beginning years, Brix did very well, earning $1.2 million in their best month. However, with a lack of systems in place and no sales strategy, Rick is now in $180,000 worth of debt and loses roughly $4,000 a month. Investing all of his retirement and life savings into Brix, he needs to make a change and it needs to happen fast.

Jon enlisted in the help of TV personality and wine enthusiast Maria Menounos and Kevin Undergaro to do recon at the bar. Maria and Kevin ask the bartender, Tina, for a wine suggestion and she suggests a red wine. When Maria asks for the price of the bottle, Tina is unable to answer. Tina was not the most knowledgeable when it came to answering questions about different wines, so she grabs Rick to have him explain instead. Maria is able to get Rick to open eight bottles of wine for her and her boyfriend to taste; eight bottles of wine is equivalent to 32 glass of wine and roughly $250. Maria then orders the pastrami sandwich, which is tasty but the flavors do not complement the wine well. Jon calculated that in 20 days $7,5000 worth of wine was being poured and only $3,000 was being made – therefore Rick was pouring away $4,000 worth of wine in 20 days.

During the stress test, it is evident that Rick’s lack of leadership and assistance hinders the staff from performing their best. Samantha, one of the bartenders, is forced to leave her bar unattended when a guest asks for a beer because the beer taps are located in another section of the wine bar. Every time she leaves, it’s money and time lost. The kitchen is unexpectedly slow… only to realize the machine that generates food orders was unplugged. One the system was plugged back in, dozens of food orders came rushing through, backing up the kitchen. Rick performed very well under the stress test. He sold 12 bottles of wine with was two more than Jon asked him to sell.

Jon renamed the establishment Pacific Coast Wine Bar to give it a fresh start. The inside is redecorated to be more cohesive with the brand and ambiance of a wine bar. The bar tops are reupholstered in white leather to make the wine glasses “pop”. Jon also added two POS systems, to each room, from two touch and the systems connect to the kitchen making food orders easier to track. Additional beer taps were also added to the bar located in the wine room, so the bartenders will no longer have to leave the bar unattended to pour guests beer.

Four weeks later, Pacific Coast Wine Bar generated $63,514.80 in revenue and Rick implemented systems that have set up his staff for success. He is also more focused on his bottom line than being the center of attention.

Garnish with a lime wheel

Garnish with a blackberry

Jon Taffer took to Twitter last night to answer questions during a special episode of Bar Rescue just before the first installment of the epic television event, Tut. We had a look at some old nicknames, his favorite places in Vegas and his preferred baseball club.

Read the full article on Spike.

Air Date: July 19th, 2015
Season 4, Episode 23 – Brokedown Palace
Location: Upland, California
Description: Tension is at an all time at high in Upland, CA when Jon Taffer and his experts challenge co-owners Sam Khalil and Ghazi Ashkar, who continuously micromanage each other and undermanage their staff.

Jon Taffer and his team of experts head to the West Coast to rescue The Palace, a Moroccan-themed bar owned by two brother-in-laws located in Upland, California. Since opening its doors in 2013, The Palace has accumulated $650,000 in debt and loses $8,000 to $10,000 monthly. Business owners Sam Khalil and Ghazi Ashkar hold very different roles within the bar, Sam being in charge of the back while Ghazi entertains the guests in the front with free drinks. Sam and Ghazi both have resentment toward each other for the bars failure, which created a toxic work environment for their employees. The staff at The Palace lacks the leadership, communication, and direction needed from Sam and Ghazi, making it impossible to run the restaurant properly.

Jon recruited help from Alexander Siddig and Iddo Goldberg, actors in Spike’s new mini series Tut, to do recon at the bar. Alexander and Iddo, who finished filming Tut in Morocco a few days prior to their arrival at The Palace, were less than impressed at the poorly executed Moroccan décor throughout the bar. Alexander and Iddo drank a poorly concocted martini, waited fifteen minutes for a menu, and sat through an awkward belly dancing performance. The surveillance cameras placed inside the kitchen captured the chef handling raw meat before touching the plates of hummus, which were then served to Alexander and Iddo. An infuriated Jon radioed them to not eat the food, as it was unsafe. 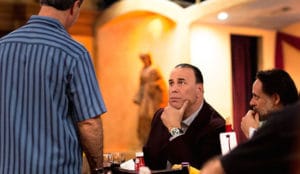 Due to the size of The Palace, which sits at 7,000 square feet, the remodeling had to begin immediately in order for it to be completed on time. The stress test took place at Stein Haus, a bar that Jon had previously rescued, and was a complete disaster. The pita bread was burnt, the inexperienced bartenders continuously served inconsistently poured cocktails, and the wait for food and drinks was entirely too long. Jon sent one of the bartenders home after she continued to make the same mistake in holding the bottle of alcohol incorrectly, causing her to make unequal pours. Sam and Ghazi have switched roles throughout the stress test, Ghazi now in charge of the kitchen and Sam out managing the front. Ghazi decides to then leave the kitchen and mingle with guests out in the front, causing an argument to erupt between the two owners. Jon finally shuts it down.

For a fresh start, Jon renames the bar Menara, giving the bar a more authentic Moroccan vibe. Mia Mastronianni, a world-famous mixologist, crafted two signature cocktails for the bar and Penny Davidi, the executive chef at PUMP in West Hollywood, created a menu that authentically captured the Moroccan culture. To enhance the Moroccan theme, tiles were added behind the bar and colors of dark red, orange, and mustard were incorporated throughout the bar. To make the bar area more inviting Jon added bar stools, which were accompanied by newly drafted drink menus. To break the banquet-like seating, Jon implemented a new seating structure.

Six weeks later, Menara earned $72,356 in revenue. The bartenders have excelled and the staff has enjoyed the new sense of leadership felt throughout the bar. Sam and Ghazi are now true partners, who respect each other.

Combine ingredients in a shaker with ice. Strain into a martini glass and garnish with a lime wheel.

The Fig and Honey Sour

Combine ingredients in a shaker. Strain into a rocks glass over ice.

It all started in 2011, when Tano Basso, an electrician decided to open Park 77 and take back up the family tradition of owning a bar and restaurant business. For help with funding, he asked his older brother Wayne – and nephews Angelo and Tommy, to help run the bar. Each has an equal 25% share, making Park 77 a true family affair.

Park 77 is a 4,5000 square foot facility that features 4 pool tables, a bar, and large outdoor patio. It is located in the coveted Park Merced neighborhood, just south of San Francisco State University Park. Park 77 experienced success in its beginning stages but soon started to fail after Tommy and Tano pulled back their involvement due to other business responsibilities. They turned the day-to-day management to the inexperienced Angelo.

Angelo made some bad decisions (giving away free drinks, being drunk on the job, etc.) and the bar is now in almost 200,000 worth of debt. Additional issues that have caused this bar to fail include:

During the Recon, Jon sent in two young women, Gabrielle and Krista, to get their opinion on the bar. They ordered a margarita and Mai-tai; both of which were made incorrectly. When Angelo came over and gave the women a shot, he took one also, without thinking twice. Jon noticed that he drank the entire time they were watching.

The next morning, after Angelo slept out his bender in the bar, Jon assembled the staff to give his critique. He showed Wayne the video of what occurred the night before, which visibly disappointed him. Jon also told Wayne about the adult film and called Angelo pathetic; poor guy didn’t even understand why.

Next, Jon mentioned the statistics from Bartender which said that, in the past three days, they’d poured approximately $16,000 worth of alcoholic beverages and gave away about $7,500; that’s almost half of their potential revenue. In a year, the total for this deficit equals to a staggering $360,000!

To turn things around, Jon recommended a renovation as well as the rebranding of Park77 to the The Lister; so named for the founder and first president of San Francisco State University. Jon also updated the venue with new signage that can be seen from the street, added atmospheric lights to throughout the establishment, and renovated the back bar.

These new changes were designed to provide the failing bar with the perception of being contemporary and sophisticated. To attract the target demographic of The Lister, women between the ages of 21 and 27, Jon added a dance floor. He also introduced the concept of the Triple Butt Funnel, the first ever seen on Bar Rescue, to create a situation where patrons are forced to interact with each other.

Expert mixologist Russell Davis named the Mai Tai as the Lister’s signature drink due to its origin in the Bay area from Trader Vick’s in Oakland, CA. 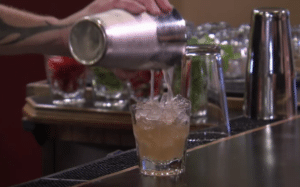 The Result: After the Relaunch

Opening night was a massive hit. The dance floor was packed with women and the bar was extremely busy. In addition, Angelo was sober and Tano and Tommy were more organized than they’d been. Fast forward to six weeks after the relaunch and the revenue of The Lister shot up 20%; making almost $74K during that time. Angelo is still sober and Tommy is now the assistant manager.

Last week, it was unveiled as Pacific Coast Wine Bar (PCWB), with a newly-painted exterior and signage and renovated interior.

Bar Rescue, hosted by bar expert Jon Taffer, visits bars and nightclubs in trouble across the country, renovating them and bringing new menu items. The renovations are an intense process, with everything taking place in less than a week to fit into the production schedule.

What’s the first information you consume in the morning?
I’m a news junkie to some degree, so I’ll turn on a news channel like CNN pretty early in the morning, grab a cup of coffee and see what’s going on in the world.

Jon Taffer, host of Spike TV’s “Bar Rescue,” knows a thing or two about setting up the perfect bar. He shared with us everything you need to know to have an amazing home bar (including what you should avoid at all costs).

Over four seasons of hosting Spike TV’s “Bar Rescue,” Jon Taffer has seen a lot of things, including someone riding a horse into a bar. He’s even gotten into some tussles with angry bar owners.

“You’re talking to a guy who buys and sells restaurants and bars with no connection to them,” Jon Taffer tells me over the phone. “They don’t live and breathe. They don’t have blood. It’s a business. It has bricks and mortar around it.”